July 03, 2020
The Hoysala Kings ruled most part of Karanataka, the Southern state of India from 10th to 14th century. These Kings were great patrons of Art, Architecture and commissioned some of the best stone temples ever built. 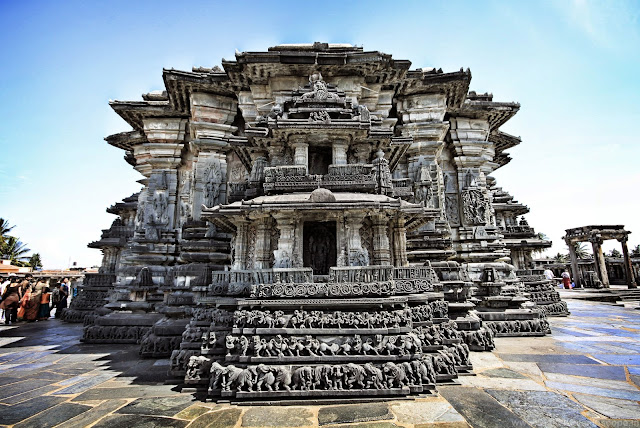 The city of Belur was the capital of the Hoysala kingdom until it was annexed by the Mughal ruler Allauddin Khilji. The Mughals looted and plunders the capital city after which Halebidu was established as the new capital. The temples and monuments of Belur are the best examples of Hoysala architecture and the highlight is the nature of the carvings; so intricate that they look like carvings made on sandalwood rather than stone. 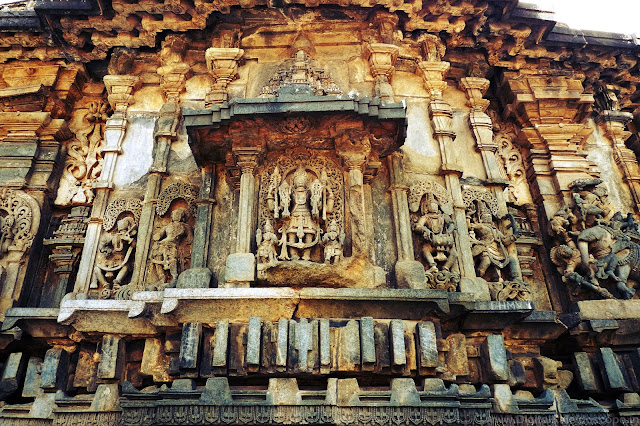 The temples are build on raised platforms and at Chennakesava temple elephants are carved on to the base of the platform. 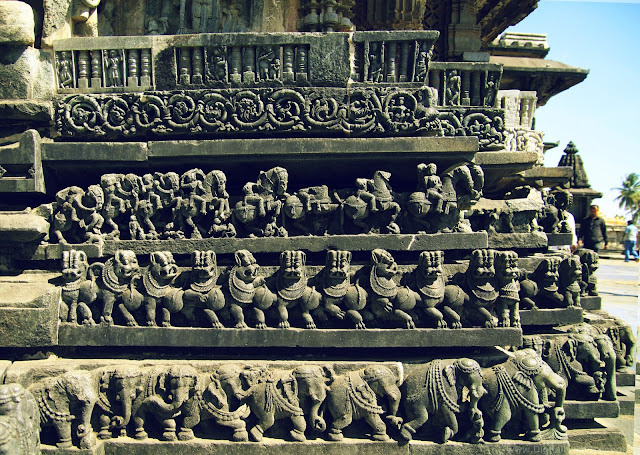 The charging Elephants at the lower section symbolize strength and stability ,the lions above symbolize courage and valor and the horses above them symbolize speed. 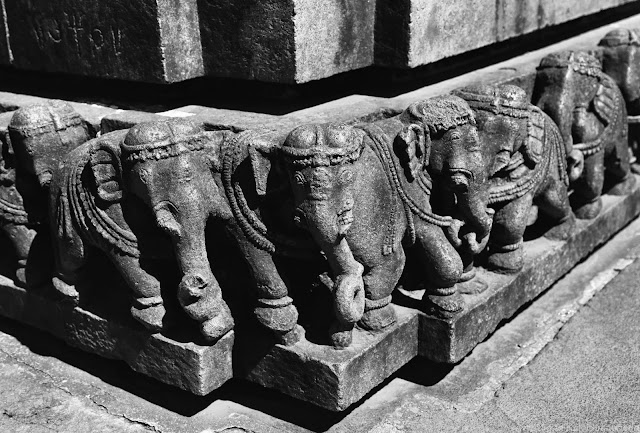 CHENNAKESAVA TEMPLE
The most famous Hoysala temple was built to commemorate the victory of the Hoysalas over the Cholas in the great battle of Talakkad. It took 103 years and talented workmen to built this magnificent stone temple and is worshiped till date .The interiors of the temple are intricately carved, the strenght of stone has given way to the beauty of idols, ornamental carvings that almost look like metal grill work. The temple was built for Lord Vishnu and Chennakesava literally translates to Handsome Vishnu. 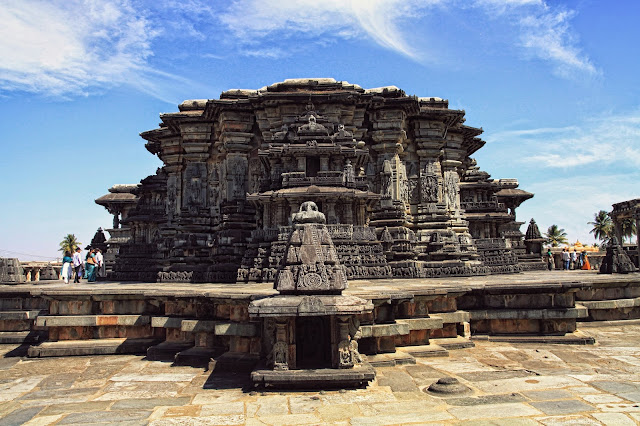 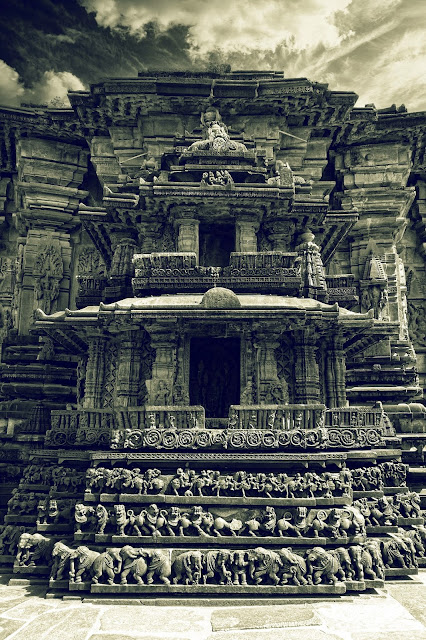 View of the Gopuram an ornate tower at the entrance of the temple. The Gopuram is filled with sculptures of different incarnations of Lord Vishnu and beautiful women. The detailed status is of garuda . 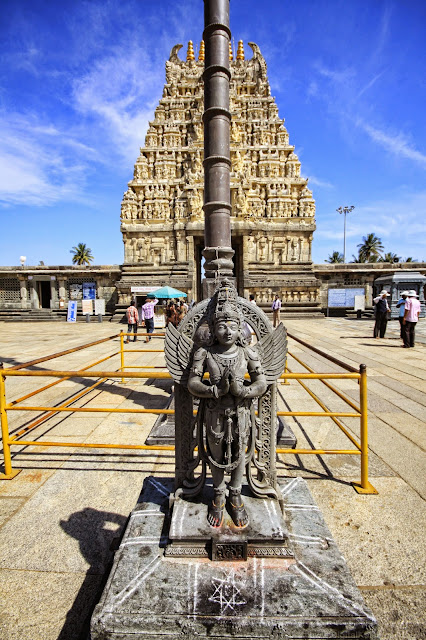 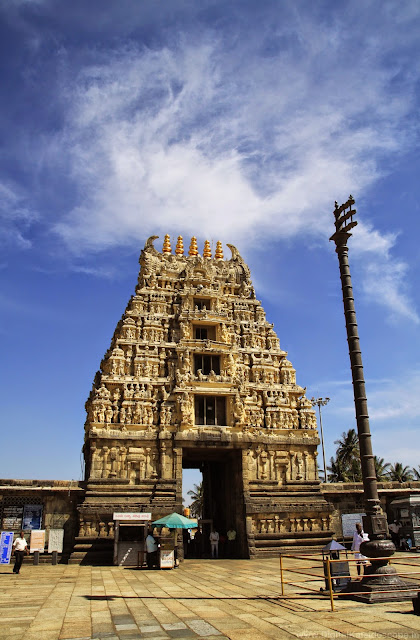 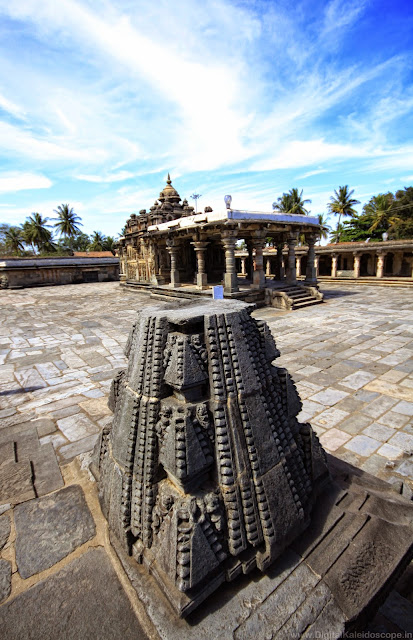 The ornate carvings found in the different Hoysala temples indicate that music and dance were given high importance during this period. 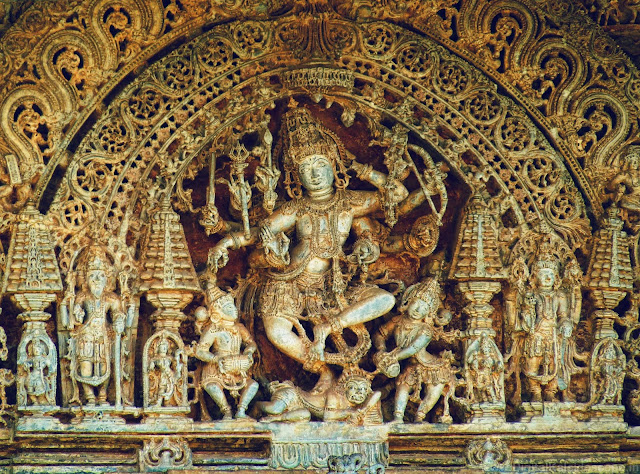 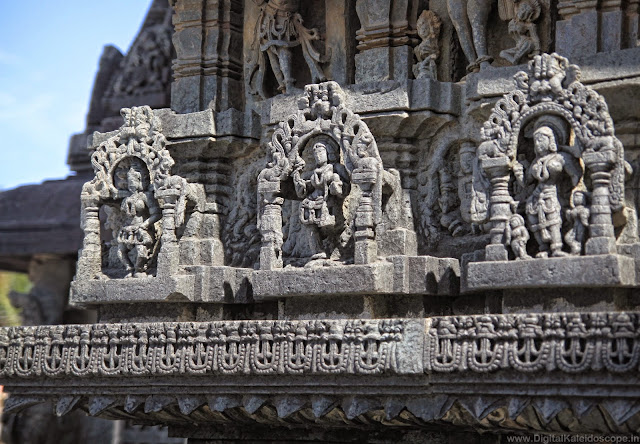 The temples at Belur are carved out of soap stone (steatite), this stone is soft and easy to chisel but attains rock hard firmness when exposed to the atmosphere. 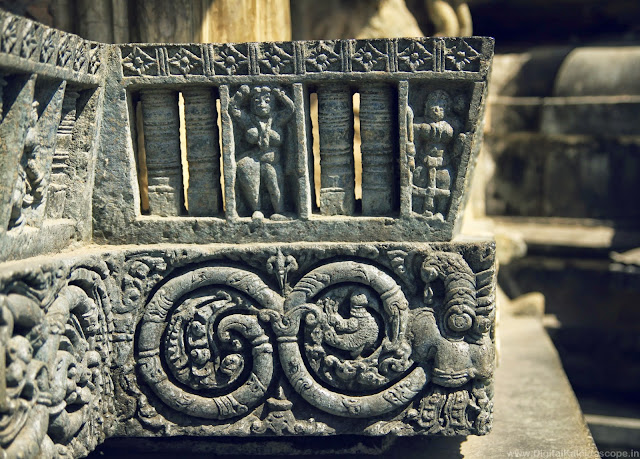 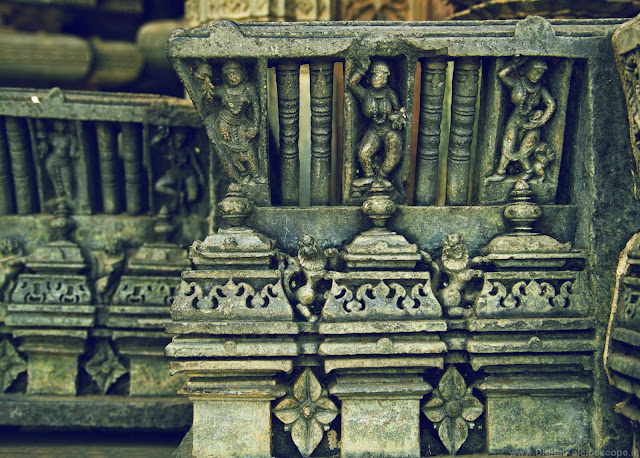 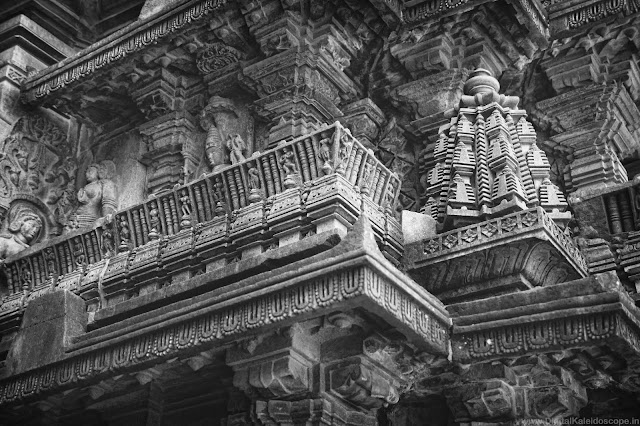 The exterior walls have carvings of every god in the Hindu religion and some from Jainism . The Hoysals were Jains before they converted to Hinduism. 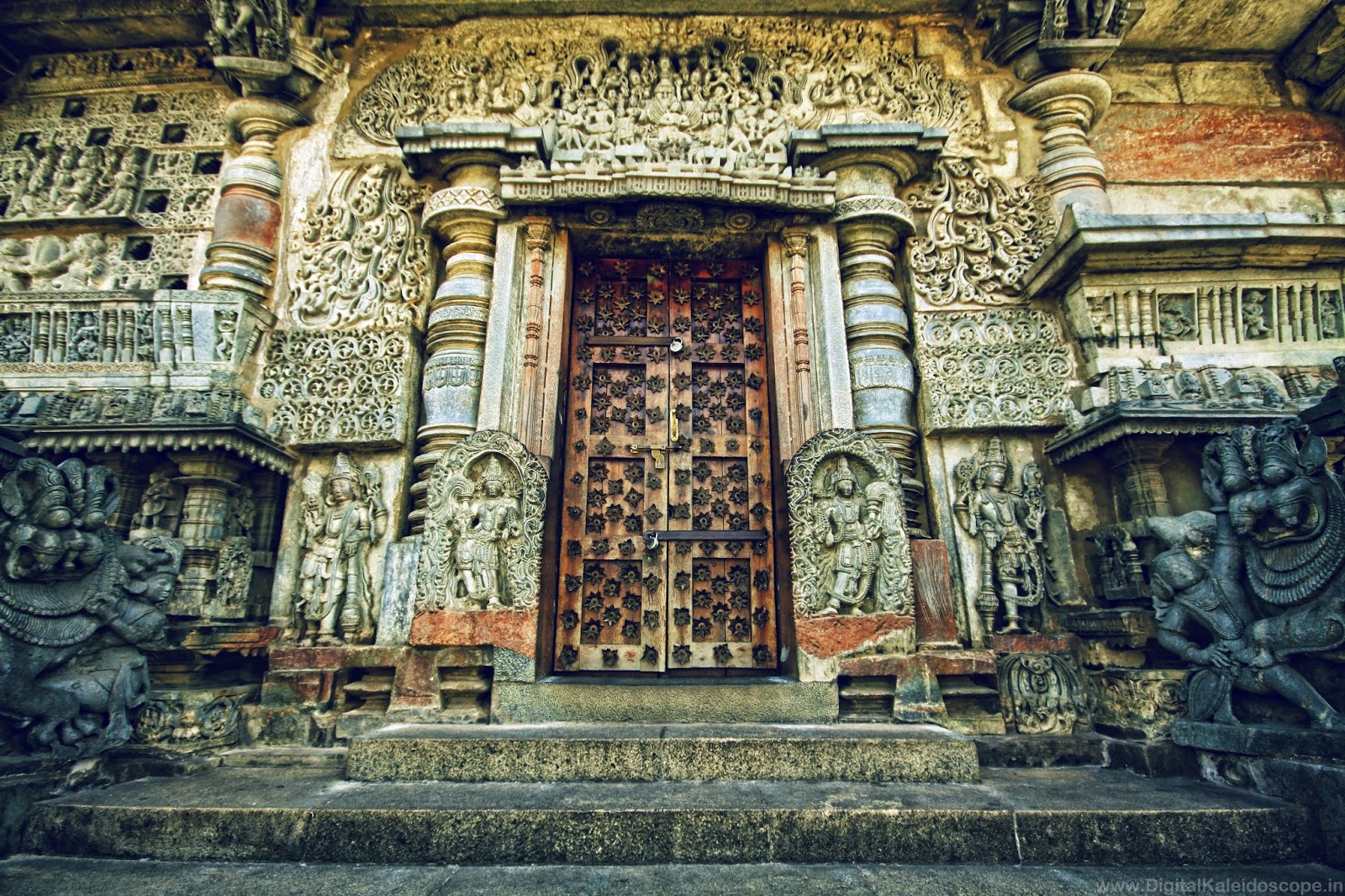 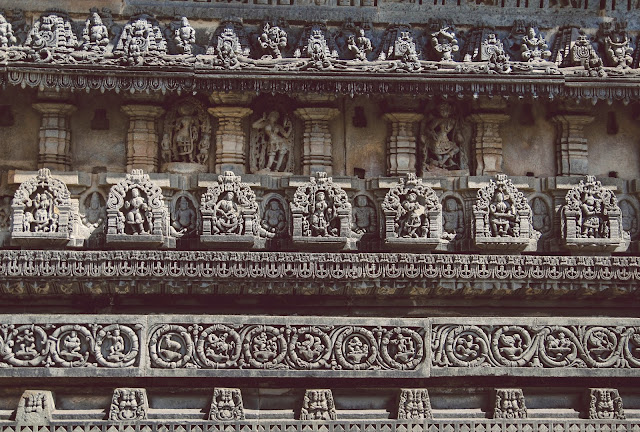 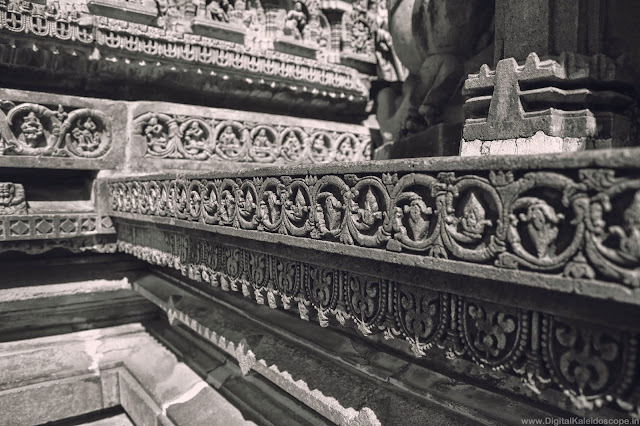 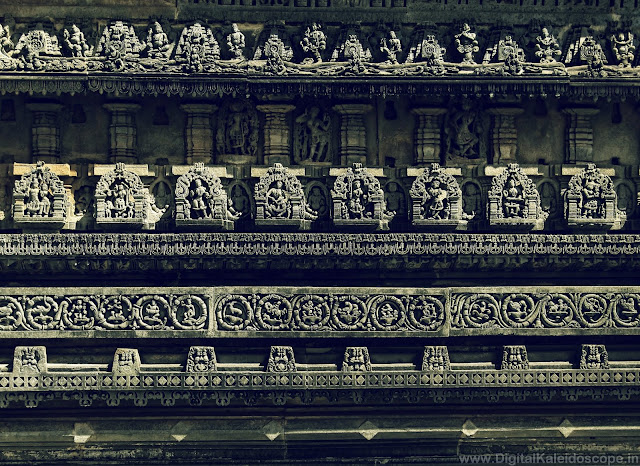 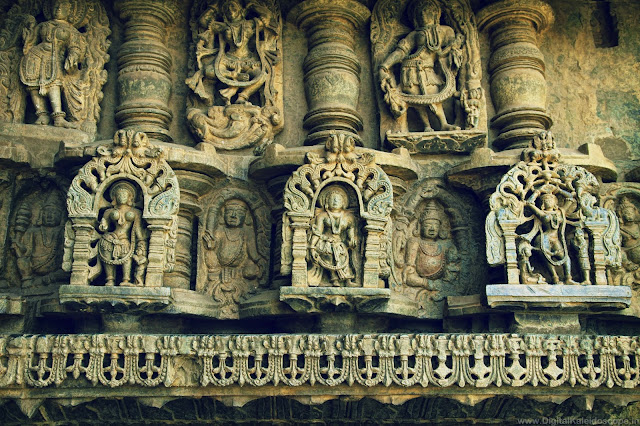 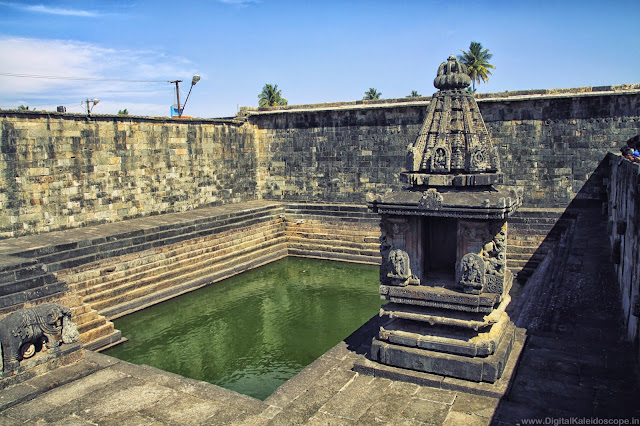 HALEBEEDU
Halebeedu was well fortified with huge boulders and a moat to keep out invaders from the north. The Hoysala empire extended from river Kaveri in the west and Krishna in the east and was enriched by fertile deltas of the rivers.The prosperity and wealth of the Hoysalas kings attracted the forces of the Delhi Sultanate, who invaded and annexed the town in 1311. The invaders took back with them camel loads of gold, silver and precious gems. Halebeedu was attacked a second time in the year 1326 after which the Hoysalas were forced to relinquish their beautiful capital. It was never re-occupied again and the capital was moved to Belure just 16 kms away. 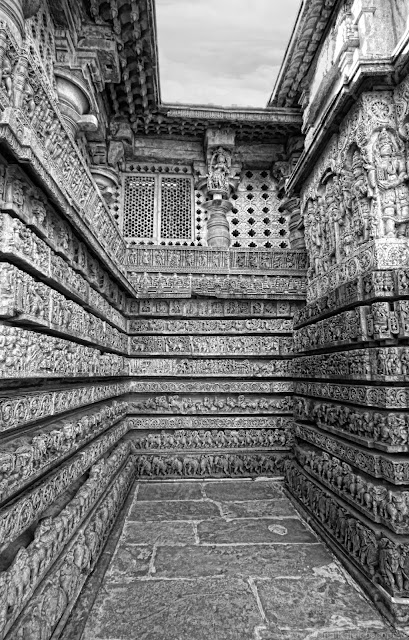 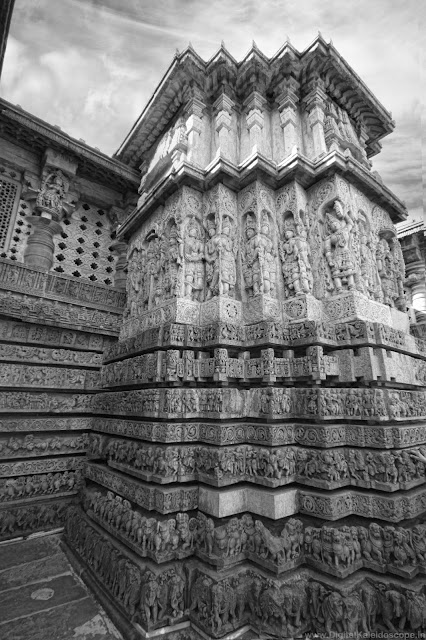 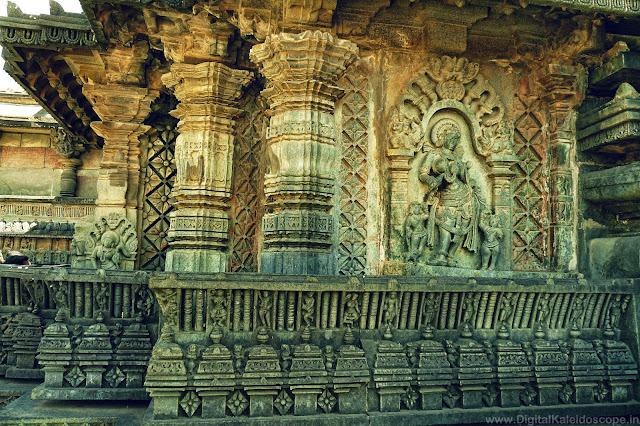 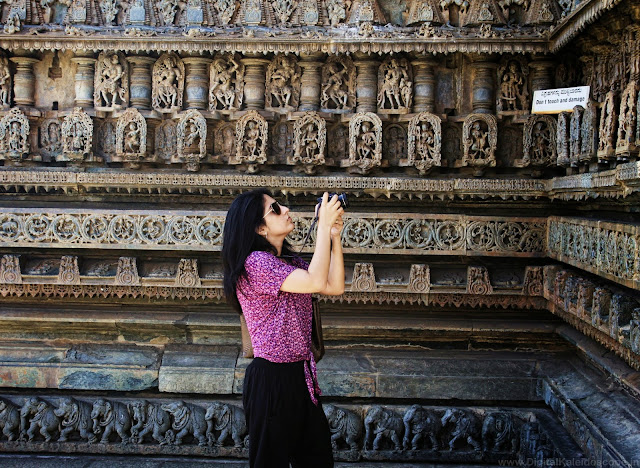 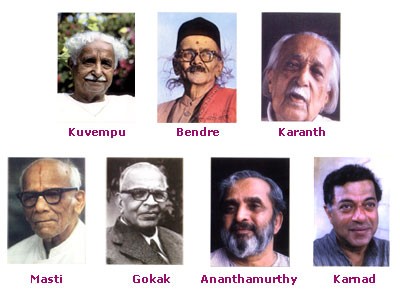 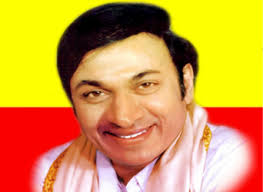 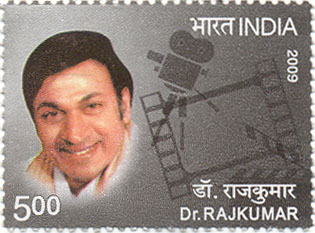